skip to main | skip to sidebar

Muster: Austrians for Field of Battle 3 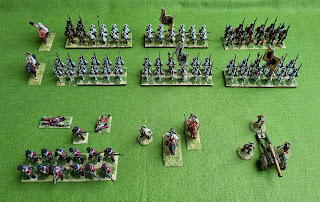 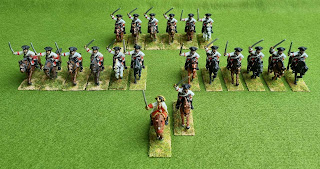 This small „army“ consists of

The Armies in Action ... 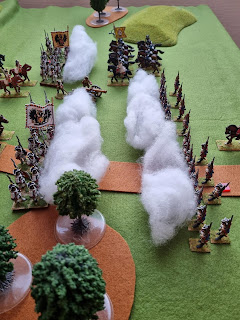 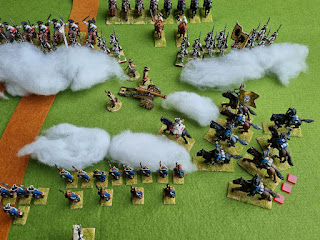 Posted by zieten at 2:46 PM No comments:

Muster: Prussians for Field of Battle 3

To play some games using Field of Battle 3 and doing it One-Hour-Wargames style, i.e. on a smaller table, I rearranged my Prussian unit organization (click picture to enlarge): 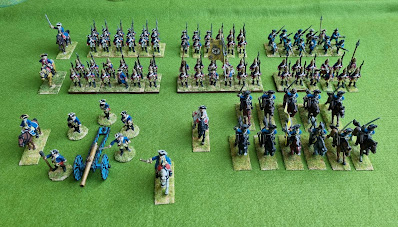 This small „army“ now consists of

- 2 Infantry Brigades, each of 3 battalions, one with an artillery battery (1 gun) attached and


The FoB 3 rules provide this force of nine units with around 9 Army Morale Points (AMP). Also, each Infantry and Cavalry unit has 4 Unit Integrity Points (UI) before it has to be removed (there is no individual figure removal). Each loss of one UI results in an equal loss of one AMP. And AMPs can not be regained.

Therefore, if the force loses 9 UI out of a total of 35 UI (Artillery units have 3 UI), equalling around 25%, it has to test for Army Morale if AMPs are down to zero and the Army Morale card comes up. Failure of this test means that your army retreats at once and you lose.

In my games, I increase the AMPs of both forces by around 33 to 50% to make them less brittle, so that these smaller games last a little longer.

Posted by zieten at 3:47 PM No comments:

Piquet Field of Battle II Solo – The Combat of Thomasberg

An Infantry Brigade on a strategic hill, too far forward and without support [click pictures to enlarge]:

The enemy sizes the opportunity and advances with two brigades and cavalry: 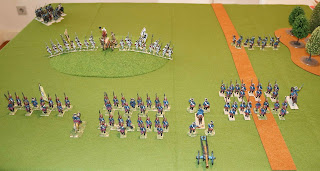 This will be over in a minute. Or not?

The Field of Battle II rules are „tight“ when it comes to army morale. Blue, the attacker rolled poorly: only seven „Army Morale Points“. He looses one point (and never can get it back) each time one of his units looses one point of „Unit Integrity“ (UI). Infantry have 4 UI, cavalry 3 UI an artillery 2 UI.
Blue has a total of 6 infantry battalions, one cavalry unit and one artillery battery, therefore a total of 29 UI. If he looses theses seven Army Morale Points, i.e. short over 25% of his UI total, he has to start rolling an Army Morale Test each time he draws an Army Morale card. In his case, that means he has to win a roll-off of two d12 to pass.

White, the force on the hill, has eleven Army Morale Points available. The forces are equal, so this amounts to roughly 38% of possible damage/UI, which could be taken.

This is one of the aspects, why the Field of Battle II rules are so appealing to me. It is a card driven game with some die rolls required before the game to determine leadership quality, the composition of the two Sequence Decks and army morale.

Scenario
In addition to army morale, the scenario (#4 „Take the High Ground“ from Neil Thomas' One Hour Wargames; on a 4'x3' table) also became even more interesting as both army commanders were not „up to their game“.
General von Plankenheim (Blue, „Prussian“) is rated as „exceptional“ but his sequence deck became „Average“. His counterpart, Grimmberg (White, „Austria“) is rated as „Average“, but he has to use a „Poor“ deck.

Narrative Aspect
Immediately, a narrative is created. If army command is not at its best, blunders occur and an infantry brigade is pushed too far forward. The opponent wants to size the opportunity, but his Army Morale is brittle and at the command level, some „friction“ seems to exist.
A decisive and energetic attack is called for; a prolonged battle must be avoided! But can this be executed? Let's see …

The Blue Force has advanced its right wing brigade to outflank the hill and to cut off enemy reinforcements. The left wing brigade has brought its 12-pdr into position and routs one of the two battalions on the hill. Cavalry outflanks the hill on the left:

White retaliates with cannister fire from its 8-pdr battery and an infantry volley.

Hard hit Blues left brigade is stopped in its tracks. The loss in Army Morale is severe. Caution begins to prevail. The brigade commander hesitates to send in his third battalion. Why not leave this to the cavalry?

And indeed, the Dragoons attack the hill from behind, routing the last battalion. But watch out! Enemy Cuirassiers enter the fray, albeit in march column. They first have to regroup to be able to attack: 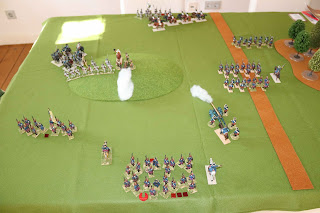 The Blue cavalry commander is unable to bring his Dragoons under control again while the enemy 8-pdr battery, lead by its brigade commander, still pours cannister fire into their infantry brethren. Something must be done!


The fellow commander of the Blue right wing brigade, on his own initiative, dispatches one of his battalions to attack the flank and destroys the 8-pdrs.

Meanwhile, the White Cuirassiers get shelled by the 12-pdrs and quit the field:

The White reinforcements arrive, a full Four-batallion brigade. They march bravely forward, its leading veteran battalion exchanging volleys with the enemy and then overrunning and destroying the 12pdr battery. Afterwards the brigade retired from the field in good order.

[Sadly, the photos of this valiant action were inadvertently deleted].

Conclusion
The battle is over. Nobody won. A draw. The Blue CiC had to take three, yes three, Army Morale Tests and passed all of them. Each of them a d12 roll-off. Call him lucky!

The game was highly entertaining and engaging, its narrative compelling and it provided lots of character to the armies and personalities. The Field of Battle II rules are a keeper.
Posted by zieten at 1:57 PM No comments:

At long last I completed some commanders to add them to the electoral Order of Battle.

The Commander in Chief: a Foundry figure painted as Ferdinand von Braunschweig (click pictures to enlarge):


His ADC, the Flügeladjudant der Kavallerie. He might also act as commander of the electoral cavalry:


These two miniatures are identical to the painting in Osprey's Men-at-Arms Series No. 248 "Frederick the Great's Army 3 - Specialist Troops", Plate B, p. 26, which shows Ferdinand in the uniform of his own regiment (IR 5).

The Foundry figure even has the ribbon and breast star of the Order of the Garter (bestowed upon him after the Battle of Minden) sculpted! The only difference being, that the model wears the ribbon below the coat and not above.


Finally, Johann Dietrich von Hülsen, wearing the uniform of his own regiment, IR 21. Also a Foundry figure (complete with the buttonhole tassels which are typical for the officersof IR 21!) but with a mini-conversion: I promoted him to Generalmajor by stealing some woolen thread from my wife and modelling him a feathered hat-edge:


Here they are all together:

What prerequisite is there to fully enjoy a historical wargame scenario and its tactical challenge? Answer: You do not know anything about the battle (and even about the war).

With this being the case, my friend „The Don“ invited me to take on the role as the scotsman Simon Fraser, British Commander at the Battle of Hubbardton, July 7th, 1777 (click pictures to enlarge).


The rules in use were Keith Flint's „Post of Honour“, a simplified version of his „Honours of War“ rules.

The scenario began with some well thought out „Kriegsspiel“-elements, which required me to assess various and conflicting intelligence reports. Not knowing what went on historically added a lot in respect to immersion!

The plan I came up with, centered on a controlled and measured offensive on left wing and center combined with a flanking maneuver on the right with the Grenadiers. I wanted to give Baron Riedesel - my reinforcements, whose position I was unsure of - time to arrive and act as a reseve and not exhausting my troops too early.


A Britsh victory thanks to the steadfast Grenadiers and the recklessness of the Americans who repeatedly threw themselves against the "red brick wall" in close assault.

A thrilling and entertaining game, lasting roughly two and a half hours. The "Post of Honour" rules worked smoothly in the background. Their "Featherstonian" element - the player with the iniative having to decide to move first and fire second or the other way round - required some interesting decision making.

Thanks a lot to the Don for a visually appealing, thrilling and intersting scenario. It proves, that with a simple, well thought-out ruleset and the right mindset a lot can be achieved.

Necessity is the mother of invention. With 12 musketeers already painted, I was looking for a suitable regimental commander.

As shown in the picture below, the coats of IR 3 Anhalt had no lapels and two rows of buttons, officers 12 gilt buttons on each side.  A Foundry Prussian Officer came close, but - besides being already fully painted as Johann Diedrich von Hülsen - had tassels instead of buttons.


Time to expand the skill set and to learn how to use Greenstuff, which I have never used so far.

I took a Russian General from Foundry (pack SYWR031) and gave him the prussian Ringkragen (gorget) and the necessary buttons. The left side of his coat had none and the right side too few. Fiddly stuff! But I prevailed and am quite happy with the result:


I also added a sword to a Front Rank Prussian Officer, intended to be the commander of IR 9 Quadt. Originally, he just points with his finger. Not appropriate when leading your men in to battle, I think.

Posted by zieten at 8:31 PM No comments:

I already painted an Austrian Feldmarschall-Lieutenant who will act as the Imperial Commander-in-Chief for the Blasthof scenario. He still needs an ADC and the cavalry can also use another officer.

Therefore, I added two mounted General-Feldwachtmeister from the Crusader Miniatures Austrian Generals pack. The one waving his hat will be the ADC (click picture to enlarge):


The one with the hand outstretched, I converted and gave him a sword:

The CiC in the center - the Feldmarschall-Lieutenant - is a Front Rank Figure:

A view from the side, together with the Regimental Commander (Obrist-Kommandant) of Regiment Kaiser, Nr. 1:

zieten
For me, wargaming started as a child when I looked at my unpainted bunch of PRINZ AUGUST Zinnfiguren and thought about wahat to DO with them. Some form of H.G. Wells-type activity developed and ... you know the rest!